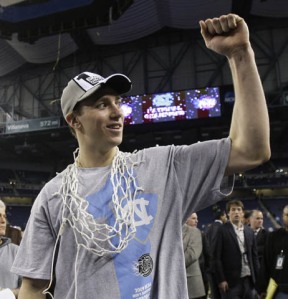 Tyler Hansbrough came back for the net — and the national title that comes with it.

And so here we are, right where everybody expected North Carolina to be when the Big 4 shunned the NBA for another run at the national championship.

The Tar Heels are seeking to become legendary, but to do it, they will not only have to beat a deep Michigan State team (11 players were on the floor for at least 6 minutes in the Spartans’ win over UConn on Saturday), but karma and home court as well.

A lot has been made of the economic woes in Detroit and all of Michigan, which literally ranks 51st out of 50 states (and DC) in the latest unemployment figures. It would mean a lot to the people of Michigan for the Spartans to knock off the mighty Tar Heels to win the national championship, but it would spiral North Carolina alumni like yours truly deep into despair if it happens.

Life as a Carolina fan has been a pretty easy one this season — UNC has lost only four times, and they came by a combined 16 points. But this is what Heels’ fans have relished all season long — and to be honest, expected. And so did the North Carolina players. That’s been evident in their dominating march to this point.

But it’s only one game, not a best-of-seven series, and you can bet that MSU coach Tom Izzo will have his players jacked up for this one, playing for more than just basketball.

It is my hope that Roy Williams — or maybe Tyler Hansbrough — will do the same for the Heels. We don’t need another dadgum slow start against a team ready to play like last year against Kansas.

I’ve been nervous all day long. Tip it up already.

“We are North Carolina.”

19:01 Hansbrough better close out on Goran Suton better than that, but Danny Green bails out his teammate by matching Suton’s 3. 5-2 start for the Heels.

15:42 The Heels have hit 6 of their first 7 shots from the field, as Wayne Ellington slips Morgan for a 3 before a solid defensive rebound by Ed Davis leads to a pretty — and tough — turnaround fader by Hansbrough. Big-time start for North Carolina. 17-7.

14:27 Big-time rebound by Davis, who then makes a spectacular back-up move and lays it off the glass.

Then Ty Lawson steals the inbounds pass, and while Bobby Frasor missed badly on the 3, Ellington is there for an easy put-back. Couldn’t have envisioned a better start. 21-7.

11:41 A little skittish stretch, and the Spartans look like they’re starting to get their legs. 24-12 at the TV timeout.

11:16 A second foul on Suton, and after a three-point play from Deon Thompson, who’s been unreal to start with nine points to lead the Heels, UNC leads by an improbable 18 points, 29-11.

7:43 Davis might be playing for the NBA Draft lottery tonight. He’s everywhere, scooping up offensive and defensive rebounds and hitting on soft put-backs. Heels still lead by 20, 38-18. Led by Davis and Thompson, the Heels hold a 20-4 points in the paint advantage.

7:01 Um, Danny. You only get five fouls before you’re not allowed to play anymore. That’s three.

And remember, too. UNC trailed 40-12 last year against Kansas — and cut it all the way to four in the second half. Can’t let up.

3:34 I’ve barely mentioned his name, but Ellington has a game-high 15 points and is just about making everything he puts up. He’s hit 6 of 7 shots from the floor and is beginning to remind Heels’ fans of how hot Donald Williams was in 1993. The thing is, he’s been fantastic defensively as well.

3:29 Korie Lucious hits a second 3, and Michigan State cuts it to 20. If the Spartans can get this thing to 14 or so by the half, this game is not over.

2:40 I understand that guys need a rest and Green is in foul trouble, but, man, I’m nervous with a lineup of Larry Drew, Tyler Zeller, Davis, Ellington and Frasor in the game, especially right after the Spartans trim it to 18. Don’t want to give up a run in the last 4 minutes of the half like the Heels did to Villanova on Saturday.

2:15 And as soon as the horn blows, out come the starters, sans Green.

OK, poked in the eye, and he stays out there.

1:00 Lawson gets in the way and forces the Spartans’ 13th turnover, and it leads to a dunk by Ellington on the other end. That’s 55 points for the Heels, who set a title game record for points in the first half.

Just a brilliant, brilliant performance in the first half. UNC is doing everything right, going inside and outside, forcing turnovers and contesting shots. Beautiful.

So now, the Heels have a chance to make history. Either win it all, or collapse like no other.

15:04 Eight steals for Lawson — a national championship record. The Heels are a little too lethargic on offense, taking a little too much of the air out of the ball, and Michigan State cuts it to 18 before Davis gets the benefit of Lawson’s steal and makes a crazy tip-in while being fouled. 61-41, Heels at the first TV timeout.

12:01 And then a huge 3 from Green stems the tide a little bit, and the Heels are back up by 19 at the second TV timeout.

If UNC can keep the Spartans from getting it down to 10 by the 10-minute mark, Franklin Street might be able to get warmed up.

11:47 UNC is down to just 42 percent shooting from the floor, which is a little worrisome. The Heels just aren’t attacking the way they were, and it’s hard to blame them. But UNC fans everywhere could use one more run.

A little more spurtability, if you will.

11:18 If I’m like this with the Heels up 18, what would I be going through if this thing were close?

7:33 Michigan State has a trip to the line coming, but the Heels stretch it back out to 19, 72-53, after a gorgeous feed inside and a deft little lefty jump hook by Davis.

Couple of things here. One, give the Spartans credit. They’ve flat-out guarded in the second half and are giving unbelievable effort considering how far down they are. Nobody’s quitting.

And also give UNC some credit defensively as well. North Carolina has been derided all season long for its struggles on that end of the floor, but since the Maryland game, a.k.a. The Greivis Vasquez Game, the Heels have found an extra step, or maybe effort, defensively. Michigan State has 19 turnovers and is shooting 42 percent. That’s a great performance by a Tar Heels’ team that has honestly been really good on defense in the NCAA Tournament.

4:57 DON’T FOUL! C’mon, it’s a 15-point game and the Spartans are in the double-bonus, and Hansbrough fouls 40 feet from the basketball.

UNC has only seven fields goals in the second half and just 21 points. I have reason to be a little frightful right now.

Call a freaking timeout, Roy. Settle them down.

4:07 Carolina has Ty Lawson, and nobody else does. That’s the difference. An incredible dribble-drive and soft layup off the glass, and it’s back to 15. Twice he’s scored when Michigan State had threatened to get it close to 10.

Now get a stop.

3:51 I would’ve screamed about it had it been a blocking foul, but Hansbrough draws the charge instead. Big, big, BIG play.

Get the scissors ready.

1:07 As Hansbrough bear-hugs everybody ont he bench, I don’t care if he doesn’t make it in the NBA. It’s irrelevant to me. Nobody has done more in a Carolina uniform than him. And nobody can ever take that accomplishment from him.

He is North Carolina Basketball. Not a bad mantle to hold.

And now he’s a national champion. He came back for this. And he, like Lawson, Ellington and Green, deserve all the accolades possible.

When the season began, the North Carolina Tar Heels were annointed as the nation’s best team. They didn’t go undefeated like so many thought they might, and they lost four times, but only by a combined 16 points.

Sometimes there is enormous pressure on the favorite to deliver, and the Heels did just that. But the way they did it was perhaps most impressive, flat-out routing the NCAA Tournament. Few teams have ever won every game by double-digits, and nobody came closer than 12 points to the Heels when it mattered most. They won their six games by an average of more than 20 points per game.

All we ask of our favorite teams is to play hard and to do anything it takes to win.

This group eschewed the money just for the chance to win.

For that, they will forever hold a dear place in every Tar Heel’s heart.